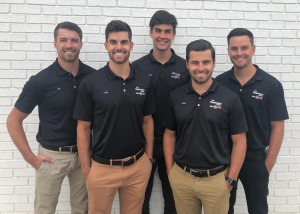 In 1946, Rudy VanDevere, started up a Packard dealership in Akron.  A few years later, he took over a Plymouth/Dodge dealership.  This was the start of the VanDevere Bunch!   In the early 1950s Rudy’s son, Joe, became the 2nd generation of VanDeveres in the family business.  Shortly after Joe joined the business the VanDevere’s added an Oldsmobile franchise to their group.

Joe VanDevere and his wife had 7 children, including Mike and Jerry who will join the family business. They are the 3rd generation to be part of the VanDevere Bunch! Joe takes over the family dealership in 1964 when Rudy retires from the dealership group he started.

In 1970, the VanDevere Bunch moves from East Exchange to 300 West Market St.  Yes, that is where the Buick store is located at today.  Even though Mike and Jerry have been working in the dealership in some capacity, it isn’t until after they graduate college that they take on management positions in the company.  It should be noted, that they learned every job in the company and started out on the lot washing and moving cars.

1980 was a special year as Joe VanDevere was awarded the cover of Time Magazine.  He was honored as Time Magazine Quality Dealer Award, 1 of only 70 in the US to receive such and award!  The Bunch continues to grow.  They buy out Cavalier Oldsmobile in the mid 90s and Sheldon McDougal Gold Key used car operation in the mid 90s.  The Golden Key lot is turned into the VanDevere Auto Outlet at 3155 S. Arlington St. This is also around the time that Joe VanDevere retires from the business leaving his sons, Mike and Jerry to run the dealerships.

The early 2000s was a busy time for the expansion of the VanDevere Bunch.  They bought out Taylor Pontiac-Buick and move the franchise to West Market Street.  They buy the Westside Lincoln Mercury building at 328 W. Market St. This is also the time that GM completes the phase-out of the Oldsmobile franchise. 2007-2009 the VanDevere Bunch purchases a Kia franchise. They purchase Burt Greenwald Chevrolet and VanDevere Chevrolet is born! This is also when GM discontinues the Pontiac franchise.

The fourth generation of VanDeveres are working in the dealership group, as Mike VanDevere’s five sons join the team in the 2010s.  2013-2015 brings a facelift to the Buick and Chevrolet buildings.   The newly remodeled Kia building has a grand reopening in August 2015.  2017-2020 brings in some of Jerry’s children to the business and Mike’s son-in-law Paul, showing that it is truly a family business.