General Motors plans to introduce an electric version of the Chevrolet Spark in the U.S.

The electric minicar will go on sale in limited quantities in select U.S. and global markets starting in 2013, including California, the automaker said. GM made the announcement during a media event celebrating the 100th anniversary of the Chevy brand.

“The Spark EV offers customers living in urban areas who have predictable driving patterns or short commutes an all-electric option,” Jim Federico, global vehicle chief engineer for electric vehicles at Chevrolet, said in a statement. “It complements Chevrolet’s growing range of electrified vehicles, including the Volt extended-range EV and the 2013 Malibu Eco with eAssist technology.”

The Spark announcement follows news in August that GM will build a Cadillac ELR luxury electric car as the automaker, which also produces the plug-in electric hybrid Chevy Volt, looks to burnish its green credentials.

“We know the demand is there; we know the customers want this car,” he said.

Electric cars have been slow to catch on in the U.S., according to Reuters:

“In the U.S. market, demand has been held back by the lack of models to choose from, skimpy infrastructure for charging the vehicles, high sticker prices, and low gasoline prices compared with other industrialized nations.”

Beginning this fall, Epcot guests will be able to enjoy a re-imagined version of the popular Future World attraction, Test Track presented by Chevrolet.

This new version of the attraction will transform the current testing workshop into the sleek “Chevrolet Design Center at Epcot,” where guests can become immersed in the fun – and fast – world of automotive design. Here, guests will become automotive designers and create their own custom vehicles. Next, they’ll buckle into a six-person SimCar ride vehicle and test out their design on the challenging track of the Test Track course.

Afterward, guests can take a fascinating look into the future of transportation by viewing a collection of the latest Chevrolet vehicles in an all-new showroom.

This fun new experience is the result of a renewed, multi-year business relationship between Disney and General Motors, companies that have worked together for more than 30 years. 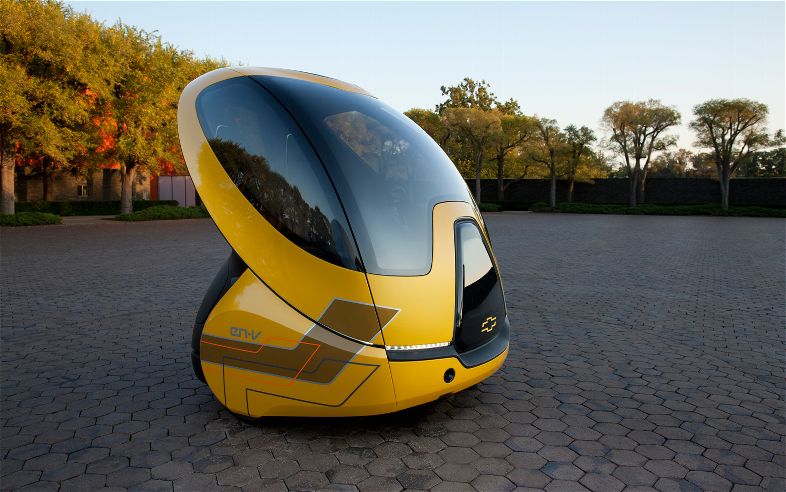 From the March, 2012 issue of Motor Trend

Yes, you should be worried about Google testing autonomous cars. It has been testing driverless Toyota Priuses and other models since competing with General Motors and other teams in the Defense Advanced Research Project Agency’s autonomous vehicle demonstrations of the late 2000s. The ubiquitous computer search engine company has been reticent in talking about its project toMotor Trend, though The New York Times’ November 13, 2011, expose on Google X, the company’s research lab, reported that the autonomy project is part of a secretive effort to open and establish new markets and technologies.

“Unimpressed by the innovative spirit of Detroit automakers,” The Times reported, “Google is now considering manufacturing them in the United States, said a person briefed on the effort.”

One non-innovative Detroit automaker is experimenting with driverless cars too, though its efforts are more practical and palatable to those of us who don’t want to give up the wheel, throttle, and brakes, much less the gearbox. GM’s futurist, Chris Borroni-Bird, director of Advanced Technology Vehicle Concepts, says some form of autonomy will be on the road before the end of the decade. 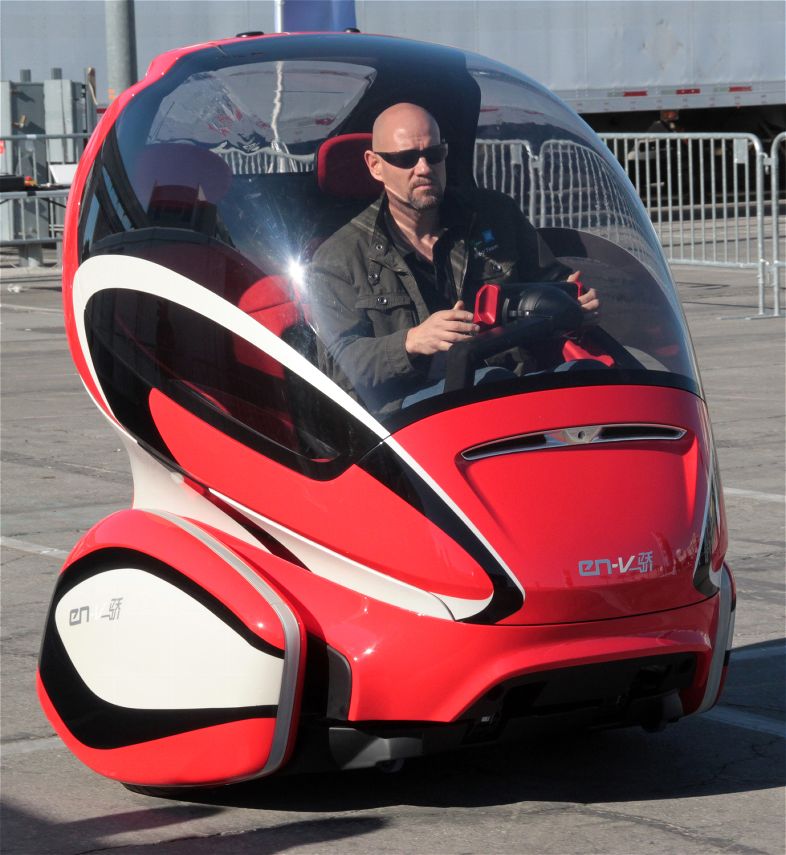 “You can address some of the aging population trends by keeping a vehicle almost the way it is and making it autonomous,” Borroni-Bird says, “but in an urban context, you almost need to rethink what the automobile does, in terms of range and speed and key performance requirements, and what it looks like.”

The result so far is GM’s Segway-based EN-V bubblecar concepts, last year renamed as part of the Chevrolet brand. When such vehicles hit the road some time in the future, Borroni-Bird says, they’ll likely look much different, but they’ll work much the same. The Chevy EN-V is designed to be a small, electric car that could have one, two, three, or four wheels, one or more seats, and be part of a megacity’s car-sharing program.

EN-Vs will have top speeds in the 25-mph range to coexist safely with pedestrians, bicycle messengers, and other vehicles, and can get a quick recharge during the day, between ride-share customers.

“It does things a bicycle and walking can’t do, and it does things a bus or train can’t do,” Borroni-Bird adds. “It’s kind of swimming upstream against what people want. But we recognize that we can’t keep selling just the same type of vehicle we make today, that goes wherever you want to go, 70 or 80 mph for 300 miles, and carry five people.”

The technology involves global positioning systems and short-range communications antennas, necessary because the tall buildings that make up urban canyons can hamper GPS. Often, the cars will run in tandem like schools of fish. Because autonomously operated cars in theory won’t have accidents, they won’t have to carry heavy safety features like airbags and 5-mph bumpers. 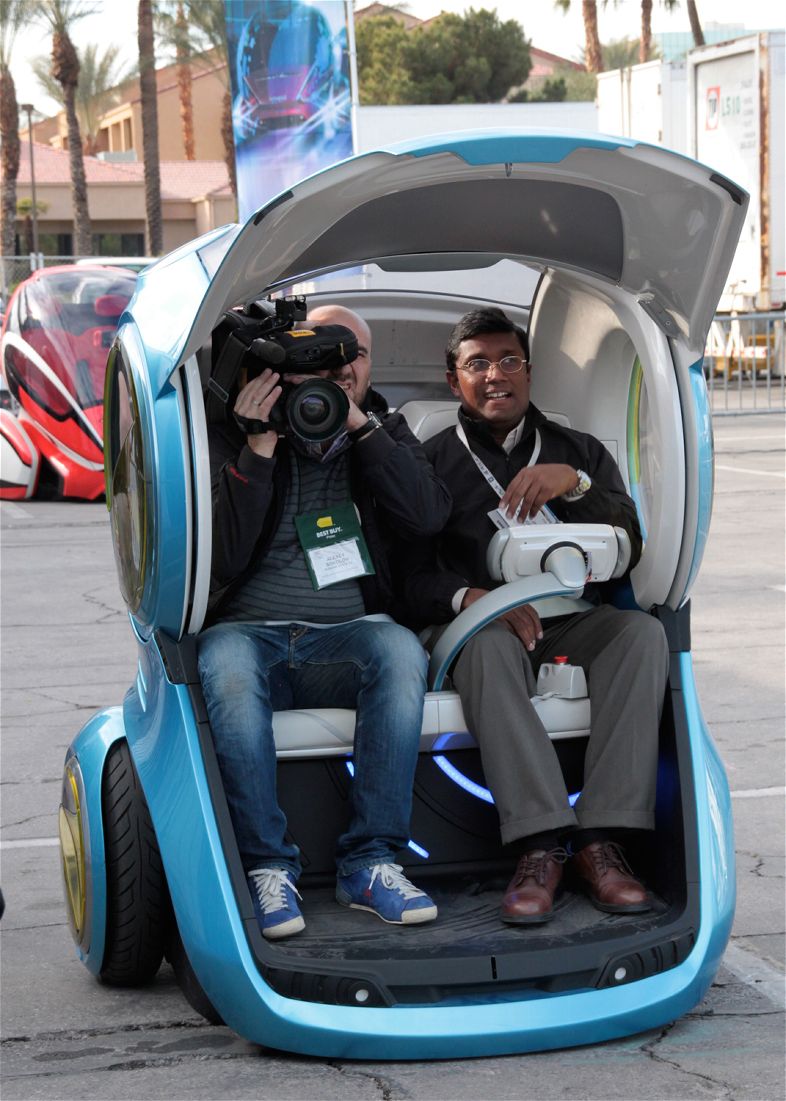 GM has a memorandum of understanding to study incorporating Chevy EN-V tech into the Tianjin Ecocity, a joint development between Singapore and Tianjin, a megacity of 12.3 million people, and a 73-mile high-speed rail ride from Beijing. The Ecocity just outside Tianjin accommodates 350,000 people, Birroni-Bird says. “If we can make it work in that size city, it’s definitely scalable.”

That means dedicated EN-V lanes and roads, Borroni-Bird continues. “We’re looking at how to integrate the next-generation of EN-V, not this one, but the next generation, into that city. The core of EN-V is really a small-footprint vehicle that’s highly maneuverable, that’s battery-powered and has network and sensing capability, to allow manual and autonomous operation.”

I briefly drove one inside a GM garage, limited to no more than 5 mph. The bubble car is incredibly easy to use, fun to drive, and finally makes good use of the Segway technology Dean Kamen oversold a decade ago. Buckle up, start it, and the “car” rises up and balances on its two wheels. Pull the yoke to go forward, and pull on bars on the back of the yoke to brake. It has a 0-foot turning radius, of course.

“We know we’re not going to solve congestion,” Borroni-Bird says, “but if you can make the travel time more productive and more predictable, it’ll reduce the stresses associated with congestion.”