From: General Motors Will Be First Automaker To Test Self-Driving Cars In New York City
http://gmauthority.com/blog/2017/10/general-motors-will-be-first-automaker-to-test-self-driving-cars-in-new-york-city

General Motors is, arguably, one of the most aggressive companies working towards a fully self-driving car. To assert its position, GM will be the first automaker to test self-driving cars in New York City, reports The Wall Street Journal.

No company has taken to New York City with self-driving dreams in mind, but GM is determined to send a fleet of autonomous Chevrolet Bolt EVs to Manhatten next year, via Cruise Automation. Cruise engineers are currently mapping out the area where the cars will undergo testing. For GM as a whole, New York City presents a very different challenge than current test areas.

Companies perform most self-driving car tests on the West coast, specifically in California and Arizona. There, the sun shines more often than not, and winter doesn’t include snow. On the East coast, it’s a very different story, and more traffic and congestion will offer fresh challenges to GM’s self-driving car software.

Cruise Automation CEO Kyle Vogt said New York City will “improve our software at a much faster rate.” “Anyone else who’s driven in New York knows that it’s going to present some unique challenges,” he added.

VanDevere Buick has been awarded the “Mark Of Excellence Award” for 2016. 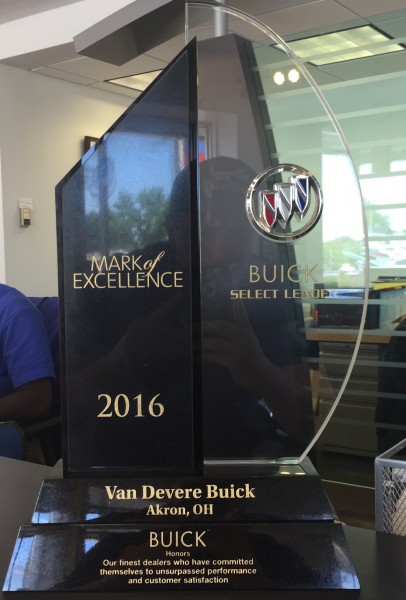 General Motors recognizes dealers every year that are committed to excellence with the “Mark Of Excellence” award. This symbolizes the very pinnacle of success!! The award represents the highest honors in the industry indicating that VanDevere truly is one of the “Best of the Best.”