Is a man with a truck cooler than a man without a truck? The all-new 2015 Chevy Colorado says yes, and we couldn’t agree more. 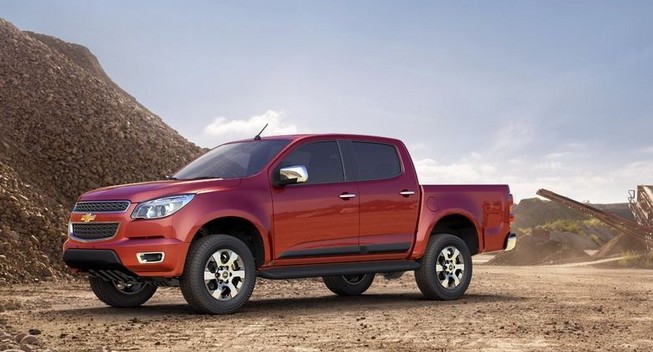 General Motors gave its first look Thursday of the all-new midsize pickup family that it will start selling next year, keeping the traditional names: the Chevrolet Colorado and GMC Canyon, said Chief Financial Officer Dan Ammann.The 2015 model pickups return to the GM lineup after ending production a year ago. The final stock is still being sold off.

While full-size pickups are huge business in North America, compact or midsize pickups register less than 2% share of total industry sales, according to data from Polk analyst Tom Libby.

Ford was once a leader in the smaller truck segment. But when Ford redesigned its midsize Ranger, it chose not to sell it in North America, steering customers instead to the larger F-150. The Ranger is a hit elsewhere in the world, and Ford can’t build enough of them.

In the U.S., the Toyota Tacoma, which has about 50% of the small-truck market, has largely filled the gap for consumers who want a smaller pickup that fits in their garage.

GM will build its new pickups in Wentzville, Mo., where it has invested $513 million in new tooling. They are North American, not global vehicles, although they do share components with their counterparts sold in Brazil, Thailand and other international markets, said Ammann who met with reporters at the Center for Automotive Research conference.

Ammann said the two models are targeted at different buyers.

“The Colorado is positioned as a sport truck,” Ammann said, while the Canyon is the work truck.

There is room in the segment with Ford no longer a player, Libby said. GM and Ford usually mirror each other’s actions, making small pickups a notable exception that will be interesting to watch.

“Ford will be watching. If the Colorado and Canyon do well without hurting sales of the Silverado and Sierra, Ford will have to reassess,” Libby said.