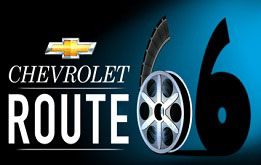 Chevrolet called upon filmmaker’s from around the world to create a commercial for this season’s Super Bowl commercial as part of their Route 66 Contest. Videos were submitted from 50 different countries and now it’s the public’s turn to vote for their favorite. Fans can visit chevroletroute66.msn.com where they can view the submissions, share them with friends, and even register to win $10,000 just for sharing their top picks. Super Bowl XLVI will air live on February 5, 2012 and the winning short film will air as one of Chevy’s five :30 commercial spots.