(DETROIT) — After hitting a 30-year low in 2009, U.S. auto sales are poised for a second straight year of growth — the result of easier credit, low interest rates and pent-up demand for cars and trucks created by the Great Recession.

The sales forecast bodes well for the industry’s continued recovery and for the broader American economy.

In 2009, Detroit automakers were in peril. Car sales plunged as unemployment soared, and loans became harder to get. Chrysler and General Motors filed for bankruptcy protection. Ford avoided bankruptcy only by borrowing billions.

Now credit is more available, interest rates are low and Americans need to replace old cars and trucks they kept during and after the downturn. Millions of drivers in their teens and 20s are expected to buy vehicles, too. That could mean more jobs, more factory shifts and overall growth.

“I’m getting a $300 per month payment,” he said just before closing the sale at Beaver Motors in Beaver Springs, Pa., near Harrisburg. “I’ve never had a new car for 300 bucks a month.”

In their effort to survive, all three automakers downsized and positioned themselves to turn profits — even if sales remained depressed. Now that sales are rising, the outlook has brightened considerably.

In 2012, they could climb as high as 13.8 million, close to what experts consider a healthy market — around 14 million.

December sales could reach an annual rate of 13.4 million, which would make it the second-strongest month of the year. Only November was better. Auto website Edmunds.com forecasts a 37 percent rise in sales at Chrysler Group LLC in December, thanks to new and revamped products such as the Jeep Grand Cherokee SUV and the Chrysler 200 midsize sedan.

Carmakers have announced plans to crank up factories and add thousands of jobs. Last January, Ford said it would hire 7,000 workers over the next two years. During the summer, GM said it would add 2,500 at the Detroit factory that makes the Chevrolet Volt electric car. Volkswagen hired 2,000 for a new plant in Tennessee, and Honda added 1,000 in Indiana. The industry will add 167,000 jobs by 2015, a 28 percent increase over current levels, predicts The Center for Automotive Research in Ann Arbor, Mich.

During the summer, the auto industry was adding jobs at a faster pace than airplane manufacturers, shipbuilders, health care providers and the federal government. It kept adding jobs even when the national unemployment rate rose above 9 percent, Standard & Poor’s downgraded U.S. debt for the first time and the stock market tumbled.

Government estimates show Americans spent roughly $40 billion more on new cars and trucks in 2011 than in 2009. Based on annualized figures from the first quarter of 2011, new-car spending totaled $206 billion, or 1.3 percent of the gross domestic product, Commerce Department data shows. That compares with $166 billion in 2009, about 1.2 percent of the country’s economy.

And the momentum in auto sales is likely to continue because people need to replace aging cars, said Jeff Schuster, senior vice president of forecasting for LMC Automotive, an automotive consulting company in Troy, Mich. The average American car is now 11 years old.

U.S. auto sales peaked at 17 million in 2005, when Detroit’s automakers were much bigger and overproduced cars that they were forced to discount heavily. Sales could eventually reach that level again around 2018, said Schuster, because of 70 million so-called millennials born between 1981 and 2000 who need to set up households and buy cars.

Other trends emerged in 2011. Many people bought smaller vehicles as gas prices hit a record average of $3.53 per gallon. Fuel-efficient compact cars, which have been vastly improved by automakers, are likely to unseat the midsize sedan as America’s favorite passenger car for the first time in 20 years.

At the other extreme, pickups rebounded as businesses started to replace older trucks. Sales for the year were expected to rise 11 percent, and Ford’s F-Series will remain the country’s top-selling model, a title it has held for more than three decades.

For much of the year, U.S.-based automakers took advantage of Japanese car shortages to increase sales, especially in the compact car segment normally dominated by the Honda Civic and Toyota Corolla. Japanese companies ran short of popular models after an earthquake and tsunami disrupted production in Japan in March.

Ford, GM and Chrysler saw their combined share of the U.S. market rise by 200,000 cars and trucks between the end of 2010 and November, 2011. The Detroit Three’s market share rose from 45.1 percent last year to 47 percent through November of last year. At the same time, Honda’s share fell 1.6 percentage points to 9 percent, while Toyota’s dropped 2.5 percentage points to 12.7 percent.

Schuster expects Japanese carmakers to take back some of the sales they lost.

Geoff Pohanka, who runs a chain of car dealers in the Washington area, said his December has been strong, thanks especially to the restocking of cars at his Honda and Toyota showrooms. He predicts Japanese car companies will offer incentives to regain lost sales.

Once scorned for unimaginative vehicles, General Motors’ Buick brand is on a roll these days.

The Buick Verano was a finalist in Motor Trend‘s recent Car of the Year competition. In fact, I heard the Verano missed the coveted award by a hair. If a more powerful engine was available — and it’s coming in 2012 — the car likely would have captured that title. 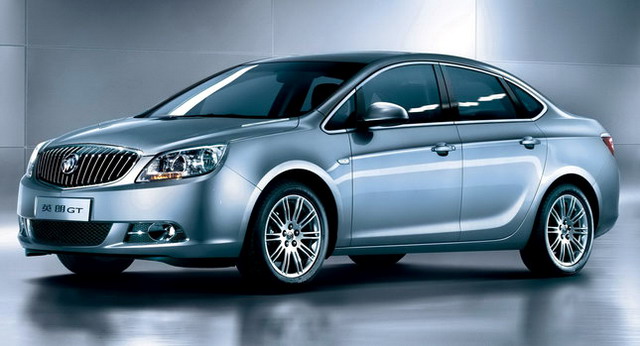 The Verano is a compact sedan that shares a platform with the Chevrolet Cruze. Beyond that, the car has unique exterior and interior styling, powertrains, and there’s a wide range of quiet tuning.

My prediction is the Verano will be a hit, but it’s too early for a sales analysis — four cars were sold in November as production was winding up.

Enclave’s sales are on a record pace. Here’s a crossover that is bucking conventional wisdom. The vehicle debuted way back in 2007 and has changed little since its introduction. Sales should be in a downward spiral. Instead, they are headed for Buick’s record book.

So what’s going on? Is the sales boom linked to a heavy incentive blitz? No. Simply, the styling remains appealing. Credit the upswing in the market for taking Enclave with it. Buick sold 52,837 Enclaves through November, an 8 percent boost from the same period last year.

And the brand’s overall sales are up 18 percent this year. Through November, 162,659 Buicks rolled out of dealerships — and that’s without Verano sales and its new crossover.

Speaking of Buick’s crossover, these eyes have seen the Encore, that’s the name of the new model. Sales should keep GM’s accountants happy. The compact is attractive, and, as previously reported in Automotive News, the crossover is based on a platform evolved from the Chevrolet’s Sonic. Here’s a news flash: It’s bigger than the Sonic.

The Encore will debut at the Detroit auto show. Production kicks up in November or December.

GM, still 32-percent owned by you, me, and the rest of the U.S. taxpayers, needs to show its many stakeholders and Wall Street that it can surprise and delight buyers with new products. That means reinventing its brands. With the Verano and Encore, it looks like Buick will hold up its end of the deal.

September 30, 2011
By Frank Markus
General Motors is advancing the airbag art in a direction that can’t earn it any extra stars or crash-test brownie points. That’s because its new industry-first front-seat center airbag provides protection in a crash nobody tests for, one in which the side impact is on the opposite side of the car from the crash test dummy. But this new bag, which deploys from the inboard side of the driver’s seat aims to prevent the 11 percent of all deaths occurring in these so-called “far-side side impacts.”

Developed with supplier Takata (with whom four pending patents are shared), this elaborately tethered bag forms a rigid tube in the shape of a figure-8, that’s tethered to angle toward the driver. It inflates in 26 milliseconds using a combination of pressurized argon and pyrotechnically generated gas, and stays inflated for several minutes to provide protection in a rollover or multiple-impact crash. Its main purpose is to cushion the driver’s head and torso from colliding with the center console, passenger seat or its occupant, or the intruded structure in a nasty pole-type hit, and to cushion the passenger from the driver.

The front center air bag arrives for 2013 as standard equipment on the Buick Enclave; optional on the GMC Acadia and Chevrolet Traverse, bundled so as to appear on 90 percent of these midsize crossovers. These family-oriented vehicles were chosen for their higher likelihood of use with two front occupants, but the technology is expected to proliferate throughout the GM portfolio. No rear center airbag is envisioned yet because of the very low incidence of reported fatalities in the rear. The module adds 2.4 pounds to the car and is somewhat bulky, so it may package easily in every seat design. The only other minor modification required was to the console latch to ensure it wouldn’t open during deployment. No cost figures were discussed, but its larger, more elaborate design makes it cost more than the typical outboard seat-mounted airbags.

Collision Warning on the Cheap

Remember when only fancy Mercedes-Benzes and Volvos could rouse you from your texting to warn of impending doom? In an industry-first, General Motors’ computer programmers have managed to make this technology available at an option price of just $295–including free lane-departure warning. Such a deal! The key is teaching the computers to use a single forward-looking high-def camera to examine 14 images per second looking out at a 37-degree field of view and determine what objects in these images are cars, trucks, motorcycles, pedestrians, and to then determine which ones are in the path of travel, and furthermore which might pose a risk of collision. It does this by noting the rate of change in image size from one frame to the next, and by comparing sizes to known dimensions like the lane width.

It’s not easy, and it gets particularly tricky in bad weather or at night (is that a close-up motorcycle, or a far-away ’55 Ford with one burned-out tail lamp?), but the system performed flawlessly on a demonstration drive. It illuminates a red warning signal high atop the center console near the base of the windshield, and sounding eight quick tones through the front stereo speakers for forward collision warning, and sounds lower tones from the speaker on whichever side of the car has strayed out of its lane.

Best of all, it seems unlikely to aggravate enthusiast drivers. The driver can set the warning/following distance warning to far, medium, or near settings, and even at the “far” setting, the tailgating/collision warnings appeared at what this aggressive driver deemed a mighty close distance. Also, the lane-departure only nags when the tire is on the line and the driver hasn’t signaled a lane change. Fair enough. Both systems can be independently switched off from the steering wheel, and the system remembers the selected following distance upon restart.

Additional features that may roll out in the near future include traffic sign recognition and automatic high-beam assist, though there’s no current plan to use it for adaptive cruise control. Those systems generally employ forward-looking radar (which currently costs from 2-5 times what the camera costs). The system was developed with Magna and Mobileye, and mounts inside the windshield behind the passenger side of the rear-view mirror, where its view is well cleared by the windshield wipers. Look for the option to appear first on the 2012 Chevy Equinox and GMC Acadia, and to spread quickly throughout the lineup