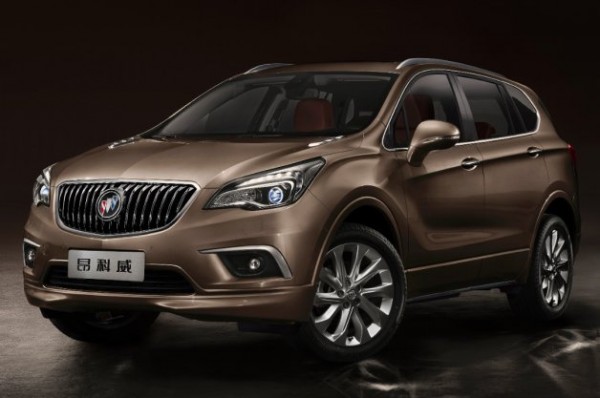 Buick is launching its new midsize Envision crossover in China at the Chengdu Motor Show, where it will slot between the subcompact Encore and larger Enclave. While it might be hard to muster too much excitement about a Chinese-market crossover, don’t completely ignore this one. There’s a very good chance it could be on sale in North America to fill the same hole in the brand’s lineup over here, possibly as a 2016 model.

We recently spied the Envision completely undisguised as it was arriving at the Chengdu show for its debut. The CUV still looks like a stretched Encore from some front angles, but that isn’t necessarily a bad thing. It’s got a similar oversized grille, hood vents (presumably faux) and large greenhouse as its little brother. Where the midsize CUV differs is its prominent crease running down the side and the different rear treatment, with wing-shaped trim cutting into the taillights.

The interior looks like a pretty nice place to spend time, too, with a predictable mix of leather, wood and metal, and it should be quiet in there with its active noise cancelation system. Infotainment is provided by an eight-inch touchscreen with a touchpad and voice controls.

In China, this CUV is propelled by a 2.0-liter turbocharged four-cylinder with 256 horsepower and 260 pound-feet of torque with standard stop/start and a six-speed automatic. That setup lets it run to 62 miles per hour in a claimed 8.4 seconds. The Envision also gets a standard all-wheel drive system that can send 100-percent of the engine’s power to the front or rear wheels as necessary and route power side-to-side at the back, too.

We tried to pin down Buick spokesperson Nick Richards about the Envision’s chances here, but all we would tell us was, “Our current focus is on continuing the Encore launch and the successful sales growth of these models.” We’d be shocked if it didn’t come to the States, but for now, it looks like we just need to wait and see for official word. Scroll down to read all of he details about the new middle child in Buick’s Chinese crossover family.