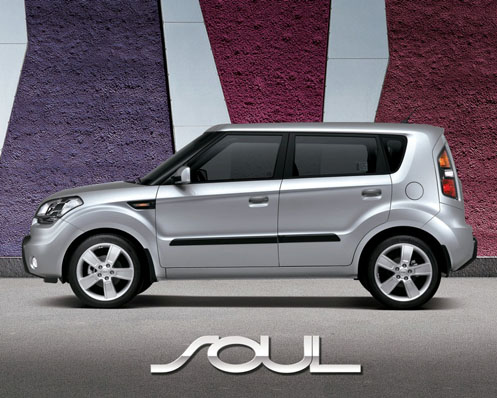 IRVINE, Calif., March 7, 2013 – Kia Motors America (KMA) has been one of the fastest-growing car companies in the United States over the last five years1, and its top-selling urban passenger vehicle, the Soul, adds another award to the collection after being named one of the “Best Car Deals Under $15,000” by Reader’s Digest.  Announced in the March issue of Reader’s Digest, five cars were awarded this distinction with the Soul standing out for its innovative design and technological advancements.

“The Soul is the vehicle that sparked Kia’s design led transformation back in 2009, and it has been a runaway hit ever since,” said Michael Sprague, executive vice president, marketing & communications, KMA. “Inclusion in the Reader’s Digest list is another great honor for Kia, recognizing our funky urban passenger vehicle’s winning combination of technology and value.  It’s gratifying that the vehicle that jumpstarted our unprecedented growth continues to resonate so well.”

The Soul was named the best car for high-tech drivers, with Reader’s Digest editors noting that the base model offers customers Bluetooth®2 hands free connectivity and USB connections for audio and recognizing the Eco package for its focus on efficiency.

“Reader’s Digest aims to enrich our readers’ lives by helping them navigate and discover high-quality products in the marketplace,” said Liz Vaccariello, editor-in-chief and chief content officer, Readers Digest.  “We chose the Kia Soul for tech-savvy drivers, based on its value, amenities, design and that it’s packed with new technology that will help simplify their lives.”

About the 2013 Soul
Refreshed for the 2013 model year the Soul features technology and styling upgrades, bringing a new level of cool with enhanced power and efficiency. New for 2013 are power-folding side mirrors, darkened chrome around the signature grille, upgraded leather on the leather-wrapped steering wheel, standard Bluetooth® wireless technology with steering wheel-mounted controls, standard steering wheel-mounted audio controls, and cruise control. The Soul now offers Idle Stop and Go (ISG) technology as part of the Eco Package which senses when the vehicle is stopped and shuts off the engine to maximize efficiency and results in reduced engine load and less fuel consumption.

Kia’s Unprecedented Growth
Kia Motors America is one of only three auto brands to increase U.S. sales in each of the past four years, and in 2012 the company surpassed the 500,000 unit mark for the first time. With a full line of fun-to-drive cars and CUVs, Kia is advancing value to new levels of sophistication by combining European-influenced styling – under the guidance of chief design officer Peter Schreyer – with cutting-edge technologies, premium amenities, affordable pricing and the lowest cost of ownership in the industry. Kia recently joined the exclusive ranks of Interbrand’s “Top 100 Best Global Brands,” and is poised to continue its momentum with seven all-new or significantly redesigned vehicles scheduled to arrive in showrooms in 2013. Over the past decade Kia Motors has invested more than $1.4 billion in the U.S., including the company’s first U.S. assembly plant in West Point, Georgia – Kia Motors Manufacturing Georgia – which is responsible for the creation of more than 11,000 plant and supplier jobs. The success of the U.S.-built* Optima and Sorento in two of the industry’s largest segments has fueled Kia’s rapid growth and is complemented by Kia’s comprehensive lineup which includes the Soul urban passenger vehicle, Sportage compact CUV, Optima Hybrid, the Forte sedan, 5-door and Koup compacts, Rio and Rio 5-door sub-compacts and the Sedona minivan.

About Kia Motors America
Kia Motors America is the marketing and distribution arm of Kia Motors Corporation based in Seoul, South Korea. KMA offers a complete line of vehicles through more than 765 dealers throughout the United States and serves as the “Official Automotive Partner” of the NBA. In 2012, KMA recorded its best-ever annual sales total and gained U.S. market share for the 18th consecutive year. Kia is poised to continue its momentum and will continue to build the brand through design innovation, quality, value, advanced safety features and new technologies.

Information about Kia Motors America and its full vehicle line-up is available at its website – www.kia.com. For media information, including photography, visit www.kiamedia.com.