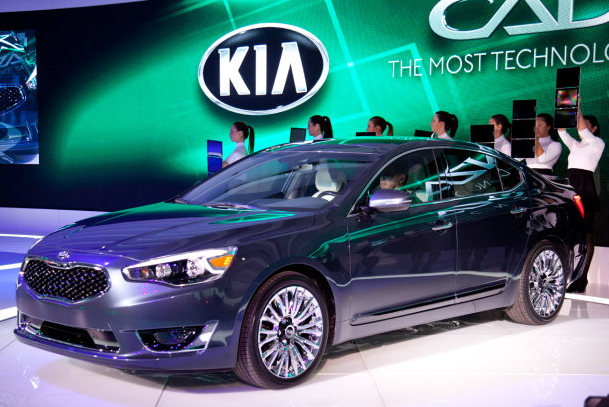 By Steven J. Ewing
2014 Cadenza is Kia’s take on the Hyundai Azera

No, this is not the oh-so pleasantly named Quoris rear-wheel-drive flagship sedan – this is Kia’s new front-drive entry into the North American market, the Cadenza. (If that sounds familiar, it’s because Kia has long used the Cadenza name in other markets.) And while it’s a sharp-looking thing, it’s not exactly an original masterpiece. Peel away that slick exterior and you’ll find a trusty Hyundai Azera doing the grunt work.

That’s no bad thing, though; the Azera’s a smooth-sailing sedan. Under the hood is a 3.3-liter direct-injection V6 putting out 293 horsepower and 255 pound-feet of torque, mated to a six-speed automatic transmission with, oh yes, Sportmatic manual mode. That power hits the ground via a sport-tuned suspension with MacPherson struts up front and a multi-link rear configuration, matched with either 18- or 19-inch alloy wheels.

Inside, there’s a whole host of nice leather surrounded by wood and chrome accents, with a driver-focused cockpit (sort of like the Optima) with a seven-inch TFT color touchscreen display. Premium options include things like Nappa leather seats, a panoramic sunroof, Kia’s UVO infotainment system, HID headlamps with active lighting, heated seats and a heated steering wheel. Sounds comfy.

Kia will officially launch the Cadenza in the second quarter of 2013, with pricing to be announced closer to the on-sale date. Scroll down for the official press blast. 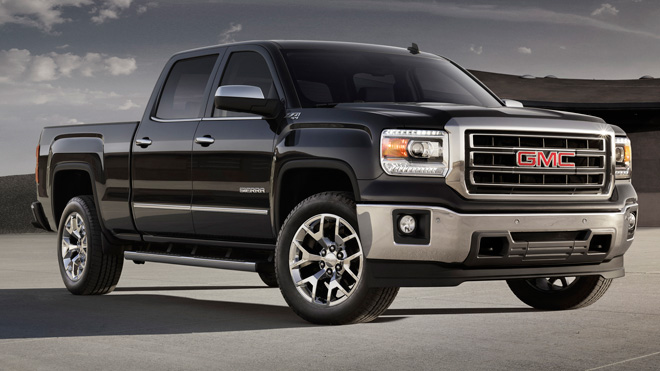 Late last week General Motors took the wraps off of their 2014 full-size trucks. While not every detail was divulged during the reveal, the overall picture of the competitiveness of the company’s profit centers is coming into focus. For those diehards expecting something revolutionary from GM’s new trucks, you may want to level your expectations, because evolution was clearly the recipe here.

The fact that these trucks are largely evolutionary isn’t much of a surprise. Evolution has been the formula utilized by General Motors and others for decades when it comes to the all-important truck segment. From the GMT-400’s to the GMT-800’s and from the GMT-800’s to today’s GMT-900’s, every generation of GM truck has been a stepping stone forward – not a leap. One could argue that GM’s mentality for truck changes seems to be along the lines of, “slow and steady wins the race.”

GM’s argument for this incremental approach is one that deserves consideration. The company alleges that truck buyers aren’t looking for dramatic changes, but rather meaningful improvements across the board. Instead of whiz-bang features like push-button start, the truck buyer wants better fuel economy and bigger buttons on the dash.

So that’s exactly what GM did with these trucks.

On the outside both Silverado and Sierra have entirely need sheet metal resting atop a revised frame. Throughout development speculation circulated that the two trucks would be highly differentiated from a style perspective, but that has turned out to not be the case. Instead, Silverado and Sierra remain just as close style wise as they are today, but that’s an argument for another day.

In person both trucks look far more significant than today’s versions. The new hood is higher, almost as high as today’s heavy-duty trucks, and the quarter panels serve as a canvas for far more pronounced creases and flares. The awkwardness that plagues certain angles of the 900’s, such as the front clip and plain cab design are gone.

The front graphic of both trucks is an improvement from today’s, however the Silverado design looks as if it’s evolution started with the GMT-800 Silverado and entirely forgot today’s truck – which isn’t particularly a bad thing. From a ¾ view of the front clip, the Silverado has a striking similarity to the timeless appeal of the GMT-400 Silverado from the late 1990’s with its squared angles and stacked lamps.

While not a design decision, the 2014 trucks have also switched to in-laid doors like the rest of the truck segment. The structural change pays mostly functional dividends, but also gives the cab a tougher look than the slab-sided doors on today’s versions.

The interior of GM trucks has always been a sensitive issue, and reaction to the 2014 interior has seen no less drama. GM says that during owner clinics it became obvious to them that truck buyers don’t want a luxury car like interior, which is counter-intuitive to what the competition from Ford and Ram appear to be learning. In an era where F-150 Platinum and Ram Laramie sell in relatively high volumes (exact figures not available), it would seem having a luxury interior is a requirement in the segment.

In GM’s defense, the new interior is a huge step forward from both flavors of the current trucks’ interior. Both Silverado and Sierra have seen sizable upgrades in material quality, with the Sierra in particular utilizing a wrapped dash with semi-soft material that will likely end up as best in the segment. Seams and switchgear have also been stepped up on the quality front, with seat fabric being in the realm of a huge leap from today’s chintzy stuff.

All three of those goals are likely feasible, at least until the competition one-up’s them. GM is rolling out an entire new line of engines in the trucks: a 4.3-liter V-6, 5.3-liter V-8 and a 6.2-liter V-8. While the displacements are the same as today, these new engines share only a handful of part numbers with today’s engine lineup. For all intents and purposes, these are all-new powertrains.

As for the new 5.3-liter, well, we’ll just say that it feels more powerful than today’s version. Both engines also go into V-4 mode more than today’s Vortec engines.

All three engines will be mated to GM’s six-speed automatic transmissions. Many were expecting eight-speed units to rival what Ram is already doing, but the bottom line is fairly straightforward…GM’s eight-speeds simply are not ready. GMI fully expects eights to arrive in the trucks in the near future, however.

So, GM gave their latest trucks a new design, all-new engines, a revised chassis and a fairly decent list of new features. In the words of Jeff Luke, executive engineer for GM trucks, “there are improvements across the board, with several significant improvements.”

Is it enough? We’ll have to wait until we spend more time driving them (and can report back), but its probably fair to say that the 2014 Silverado and Sierra will be the leaders of the pack for the first few months. The key for GM will be to keep improving the trucks because the competition is not sitting still and the bar is constantly rising.