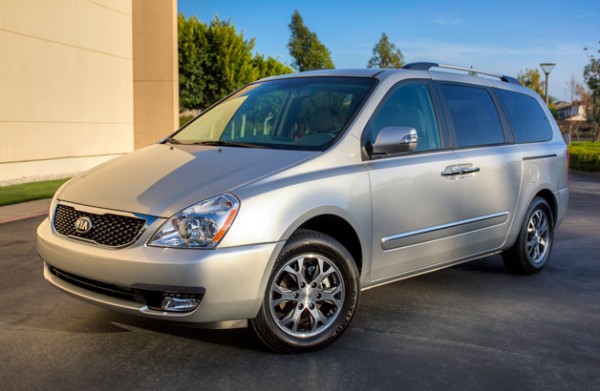 Don’t throw away your car seats just yet, Korean minivan enthusiasts – the Kia Sedona is back on the market. If you recall, Kia killed its minivan offering at the end of 2012 (there was never a 2013 model). But here’s what’s making us scratch our heads: Despite the fact that Kia did confirm that the Sedona would eventually be back, we were under the impression that it would return with a proper replacement for the aging van. (Earlier reports suggested something along the lines of that cool KV7 concept.) Instead, the reincarnated Korean minivan you see here is, well, the same as it ever was. Consider our buzz killed.

That’s not to say there haven’t been a couple of delightfully refreshed bits thrown into the new package. For starters, the Sedona wears a slightly updated schnoz with a redesigned grille, LED positioning lamps and standard foglamps inside the reworked lower fascia. (If we’re honest, the Kia looks a bit Ford Windstar-ish from the front three-quarter angle.) There’s a new 17-inch wheel design for the 2014 model year, and aside from a couple enhancements to the interior in terms of storage, that short list rounds out the full extent of the new updates.

All Sedonas are powered by the same 3.5-liter V6 that debuted in the 2011 model, producing 269 horsepower and 246 pound-feet of torque, mated exclusively to a six-speed automatic transmission. Fuel economy ratings fall in at a rather mediocre 17/24 miles per gallon (city/highway).

Pricing starts at $25,900 for the base LX model with 16-inch wheels and a cloth interior, while upmarket EX vans with leather and 17-inch wheels command $30,900 – both prices exclude $850 for destination. That’s sort of a bargain, considering that the segment-leading Honda Odyssey will run you something like $45,000 when fully decked out. 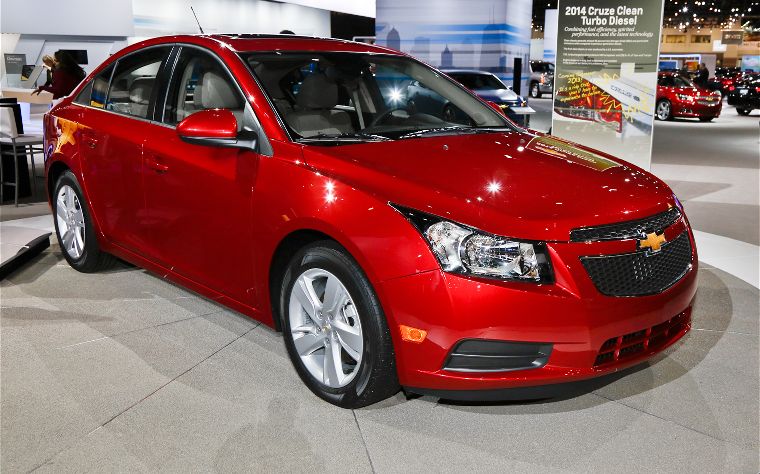 Cruze Diesel will be the most fuel efficient non-hybrid on the market, Chevy says.
By: Nick Saporito

Today Chevrolet has announced the final piece of information regarding the upcoming diesel version of the Cruze compact sedan – that the car will be EPA rated at 46 mpg. According to Chevrolet, the rating will mean that the Cruze Turbo Diesel will be the most fuel efficient non-hybrid car on the market.

The Cruze Turbo Diesel utilizes a 2.0-liter four-cylinder that generates 148 horsepower and 258 foot-pounds of torque.
Power is funneled through a six-speed automatic transmission.

By contrast the new Cruze’s diesel competition, the VW Jetta TDI, is rated at 42 mpg highway and 30 mpg city.

DETROIT – The new 2014 Chevrolet Cruze Clean Turbo Diesel, delivers an industry best EPA-estimated 46 MPG on the highway – better than any non-hybrid passenger car in America. It will be available in certain cities this spring and nationwide and in Canada in early fall.Equipped with a six-speed automatic transmission, the latest addition to the Cruze powertrain family has an estimated range of 700 highway miles on one tank of diesel fuel based on the EPA highway estimate and the vehicle’s fuel tank capacity. That’s about 10 hours of highway driving.“We harnessed generations of diesel expertise to adapt our world-class global engine for the North American market,” said Gary Altman, chief engineer, Chevrolet Cruze Diesel. “The Cruze Diesel is the best diesel passenger car out there. Chevrolet is redefining the meaning of great fuel economy with this car.”

Cruze Diesel also beats its rivals in performance with a segment-leading estimated 148 horsepower (110 kW) and estimated 258 lb-ft of torque (350 Nm), and can go 0-60 in about 8.6 seconds. Its advanced 2.0L turbo-diesel engine has an overboost feature capable of increasing torque to an estimated 280 lb-ft (380 Nm) for short bursts of stronger acceleration when needed, such as entering freeway traffic.

Cruze Diesel is powered by the cleanest diesel passenger car engine produced by General Motors. The vehicle generates 90 percent less Nitrogen Oxide (NOx) and particulate emissions when compared to previous-generation diesels. Chevrolet has sold more than 2 million Cruze models globally since it was launched in mid-2010. More than 33,000 of those were diesel powered. 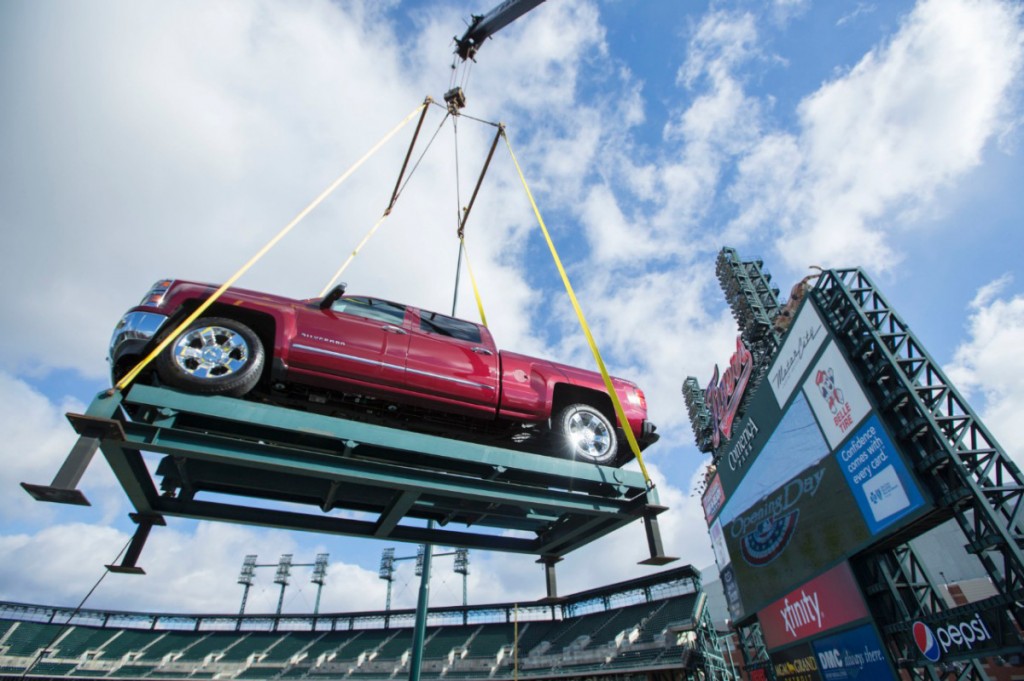 DETROIT – When the American League Champion Detroit Tigers take the field for their home opener on Friday, two of Chevrolet’s newest players – the all-new 2014 Chevrolet Silverado full-size pickup truck and the 2014 Impala full-size sedan – will overlook the action.

The two vehicles were hoisted into place on Monday, an annual rite of spring in Detroit where Chevrolet has been the Tigers automotive sponsor since 2010.

Each vehicle made news Monday apart from the thrill of finding their seats above the stadium.

The Silverado with a V6 engine will debut later this spring at the same suggested retail price as the outgoing model.  Chevrolet also announced, the V8 variant of the 2014 Silverado will offer the best V8 fuel economy in the segment and more miles per gallon than the Ford EcoBoost V6.

The Impala, meanwhile, began regular production Monday in Oshawa, Ontario, and will go into product at the Detroit-Hamtramck plant later this month.